A bank in Europe has clients across Germany, Spain, and France. Despite the international reach, the company has been losing customers. In order to prevent further churn, the company has decided to identify who is leaving the company in order to remind them of the exceptional service that they provide the customer. The bank has provided customer information, and from this, we will derive key variables in order to help the bank with their problem.

Using exploratory data analysis, we identify key variables and patterns that help us find relationships in the data that could tell us which customers are leaving. Additionally, we determine what tools best accomplish our task and develop a model that is accurate, reliable, and predictable, and report our results.

We used seaborn library utilities to produce a pairplot across all of our features to see if we could identify any obvious relationships. Because we planned to use a neural network and since several of our features differed by several orders of magnitude, we created new standardized and normalized feature sets from our raw data.

Next, using a heatmap we examined correlation between features in our raw data and our normalized/standardized data. Finding some interesting apparent relationships in the pairplot and heatmaps we utilized distribution plots and scatterplots to further examine those features. Afterwards, we decided that no useful linear relationships for classification existed among the features. So we concluded a neural network indeed seemed to be the best tool to proceed further since it can find or learn complex nonlinear relationships.

Our data came from Super Data Science (https://www.superdatascience.com/pages/deep-learning) via Kaggle.

It was put together in 2018 for a course on Machine Learning by Kirill Eremnko and Hadelin de Ponteves. The data was manufactured for the course, and is not reflective of real-world human behavior.

We downloaded the dataset from the website and, upon examining, decided it didn’t need any further work. info() method has ccounted for all 10,000 non-null values, which means that it found no null values. If it did, it would note the discrepency as a number less than 10,000. No odd rows had to be filtered, no obvious data anomalies .

*unused features were not included in the table

10,000 instance in all 14 columns. All instances are accounted for with no NaN’s present. Our data appears clean and ready for analysis.

At first, this seemed significant. However, the length of time over which this customer loss happened isn’t given in the data set. While 20% customer loss is bad for a business, it may not be that much for the model to learn from. 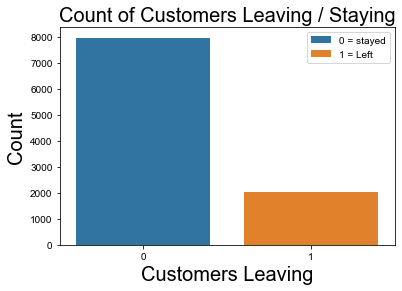 If we look at the distribution of age, we can immediately notice three prominent spike’s in membership around ages 27, 40, and 49.

If we look at the second histogram, which is hued by “Exited”, we can see a percentage of those who left the company are from the same spikes in membership enrollment.

This means that people within these age demographics are enrolling in big numbers and a certain percentage of them are leaving.

The percentage of people signing up and then leaving isn’t huge, but there’s a match. 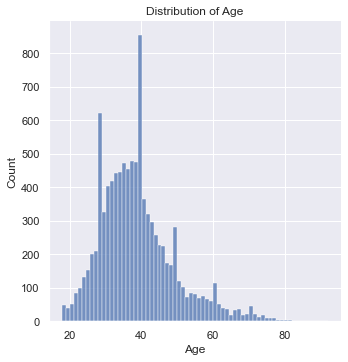 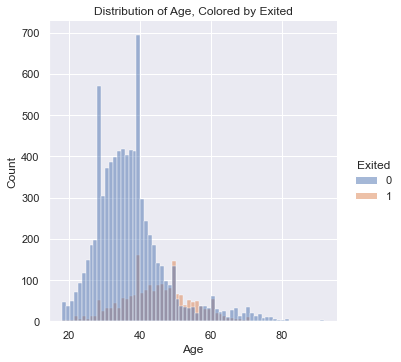 #barplot of percentage of active members

More customers have a credit than don’t. Within this category, both types of customers are leacing at roughly the same rate. 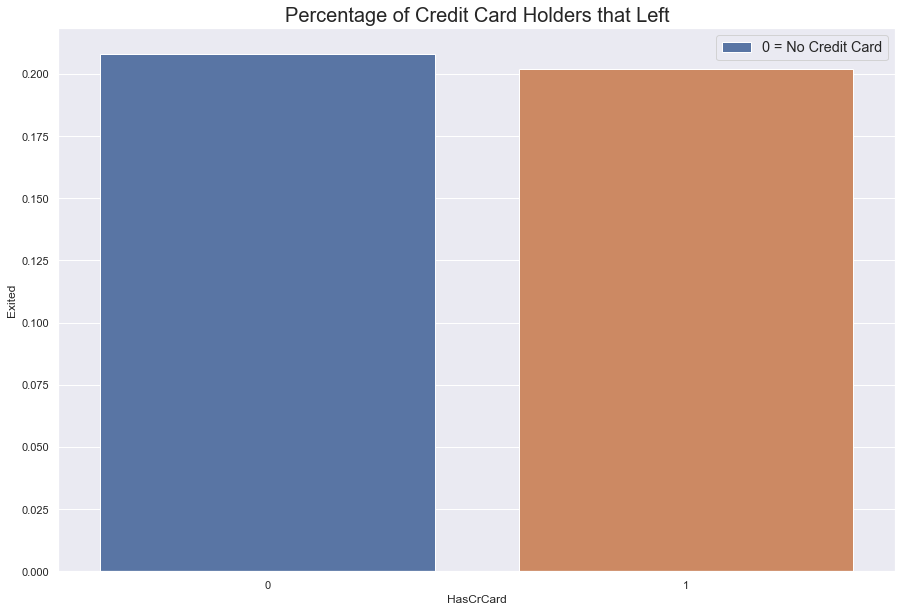 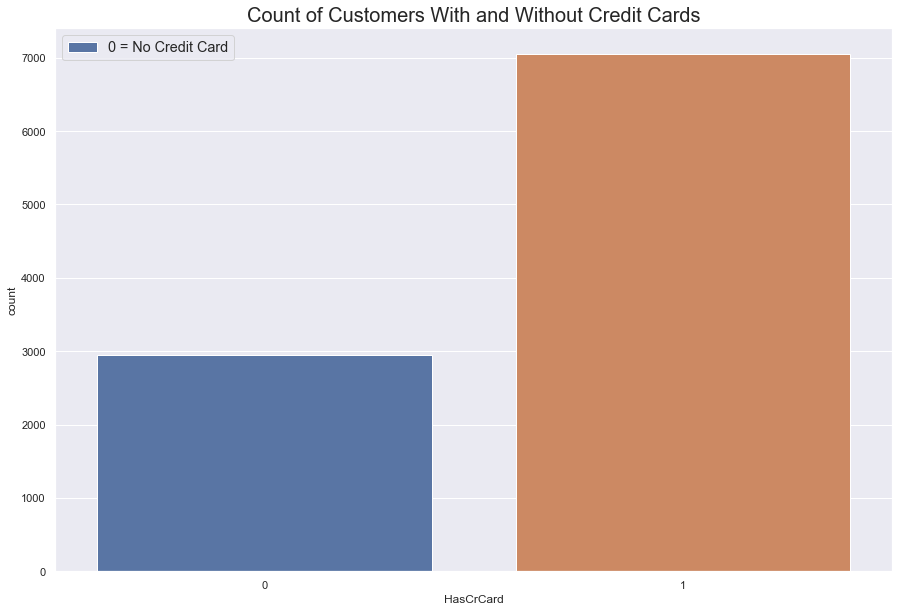 This is a trick of percentages. 100% of memebers with 4 accounts left. However, this is because a statistically insignificant amount of the customer base even had four accounts.

Close to 1500 of the customers with one account left, while a little over 400 with 2 accounts left. Considering 2,037 of the total customers base left, we can conclude that majority of the customers that left had one to two accounts 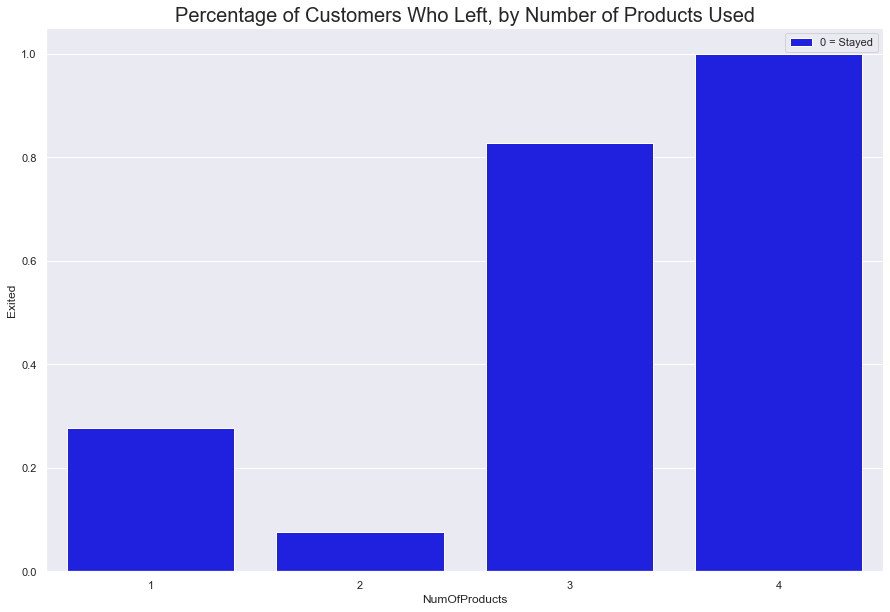 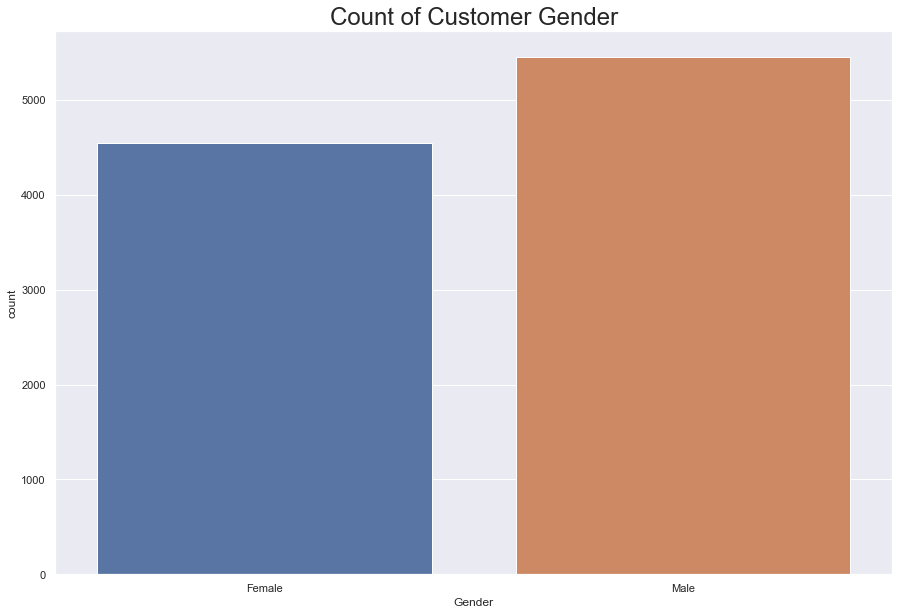 The count of tenure seems to be evenly spread between 1-9 years. That is to say, roughly 950-1000 people last between one to nine years, each year.

When looking at the count of people who exited within the tenure plot, there doesn’t seem to be any immediate correlation between length of tenure and exiting. The bank loses people at a seemingly constant rate within each tenure category. 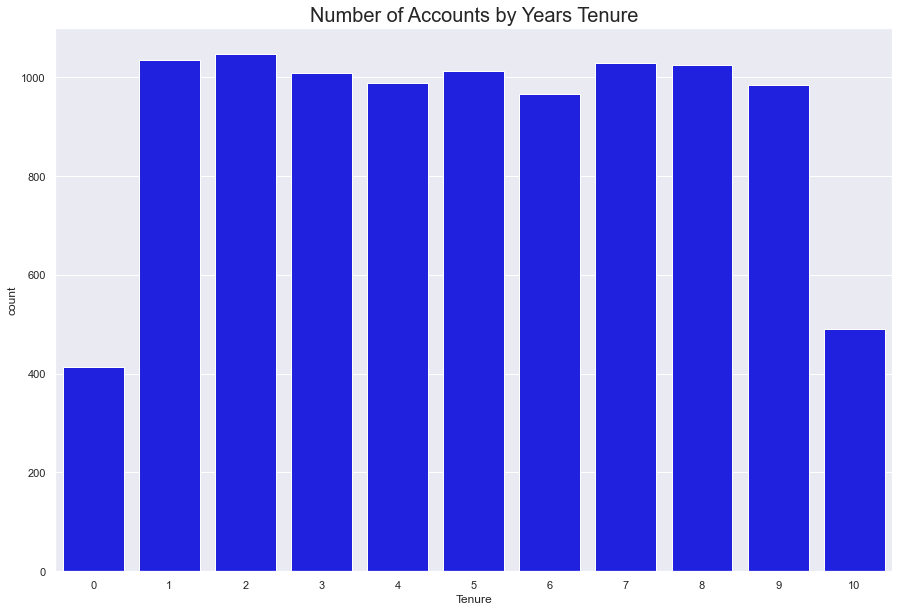 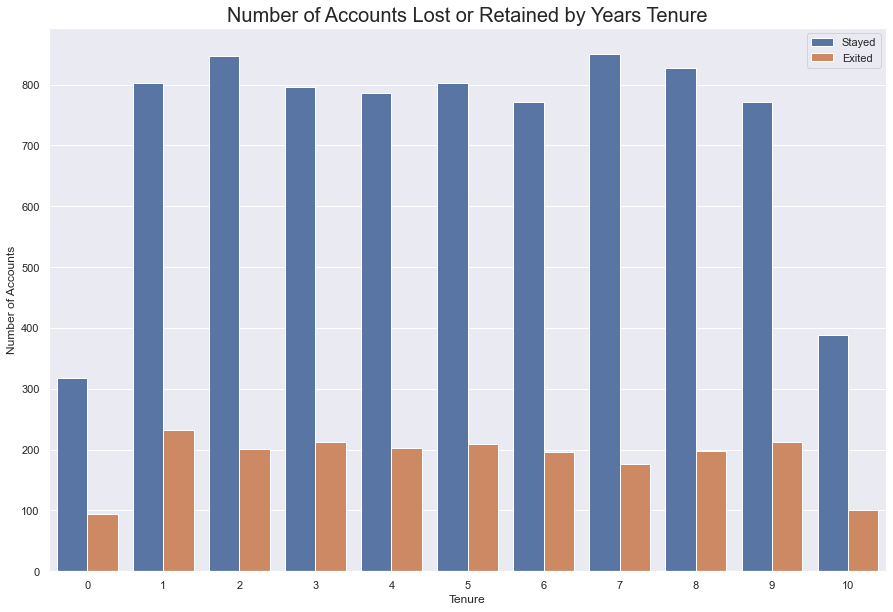 This bank regularly loses between 19% - 22% of its clients

There is no association between a client’s tenture and whether or not they will stay.

Another variable must be able to predict whether or not the bank will lose a client.

Looking At Salaries and Balances and Credit Scores

How does one’s financial situation affect their decision to leave? It’s possible that one’s credit score could inspire a customer to leave their present institution if a rival offered them a better deal, based on their score.

In the graph below, we looked at customers’ financial behavior by comparing Credit Score against Balance and hueing for Exited. The scatter did not reveal any linear relationships, such as positive slope between higher credit scores and higher on-hand bank balances.

Across the credit score spectrum, the graph revealed that people are going to have nothing in the bank regarldess of how well they manage their credit. As well, people with the highes score will span the on-hand balance spectrum.

Although we can identify a few clusters of people who left, such as at the 625 score mark (just below an on-hand balance of $150,000) nothing definitive shows up in the scatterplot. 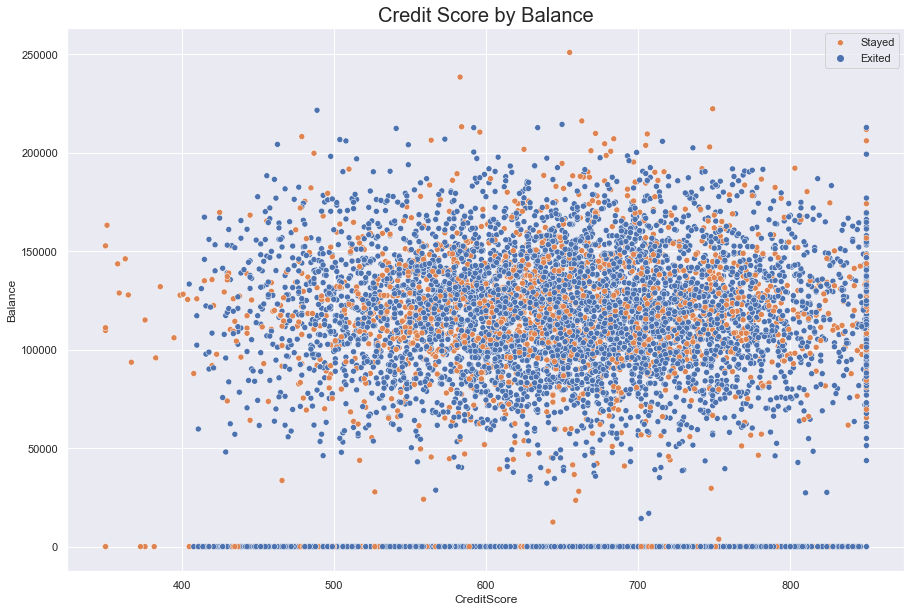 A clearer band appears when Estimated Salary is measured against Balance. The data seems to be bound between 150,000 and 90,000. This could reflect savings goals; it is not, however, enough to identify a clear relations with a customer’s salary.

Further, despite a few clusters, no clear signal emerges for Exited. 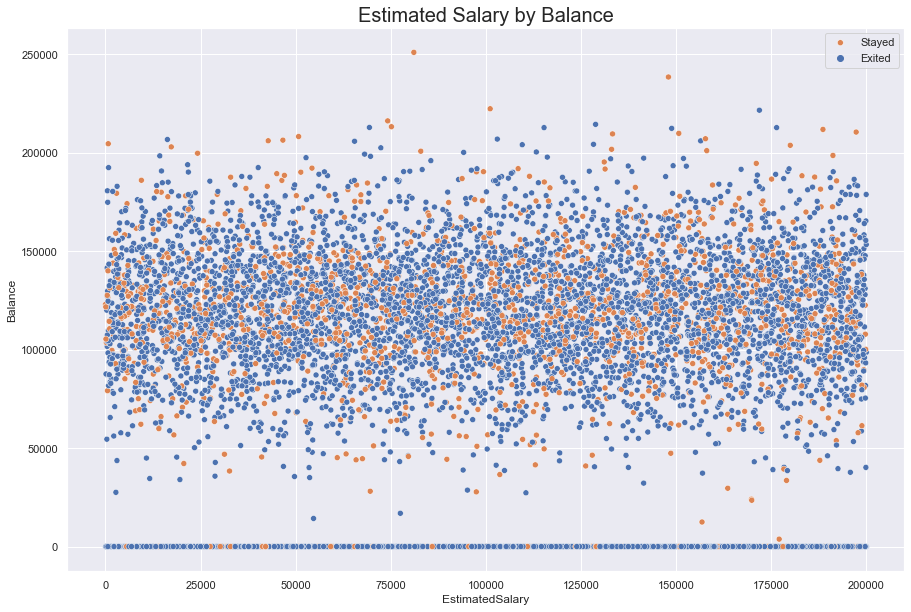 Next, we standardized and then normalized the data to see if we could see any linear relationship that might be hidden.

Ultimately, we concluded that Normilzation had the most logical use for our data since it oriented the data around the difference between the max and min rather than standard deviation. We felt normalization handled the range of data better than standardization. 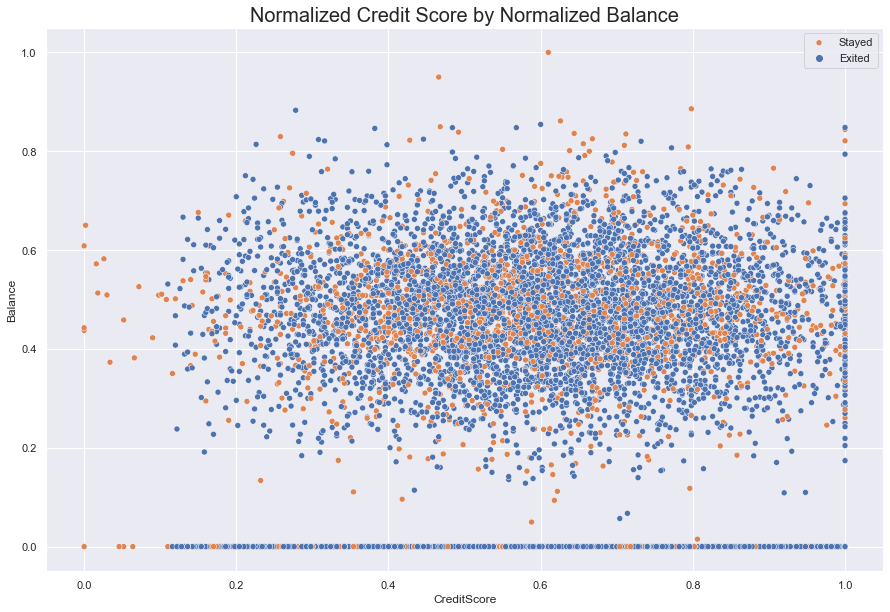 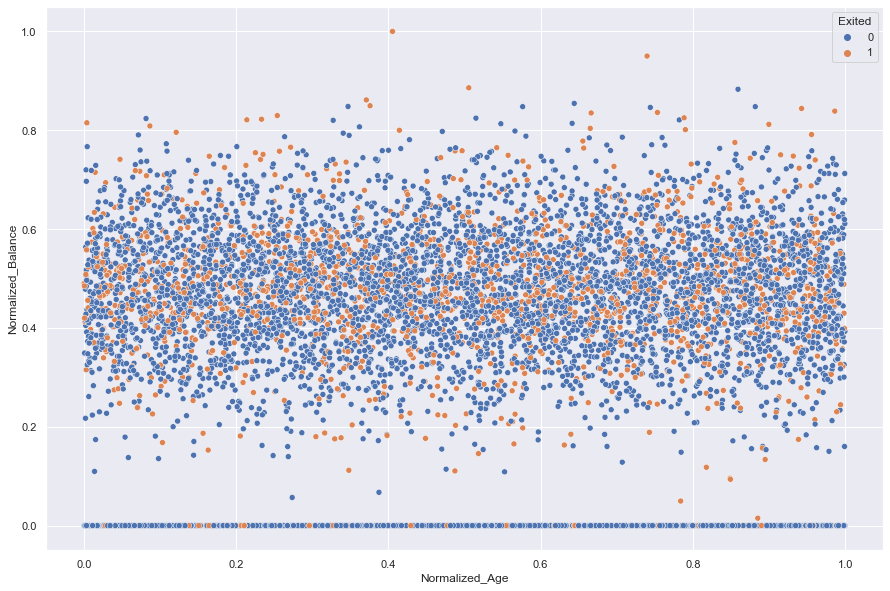 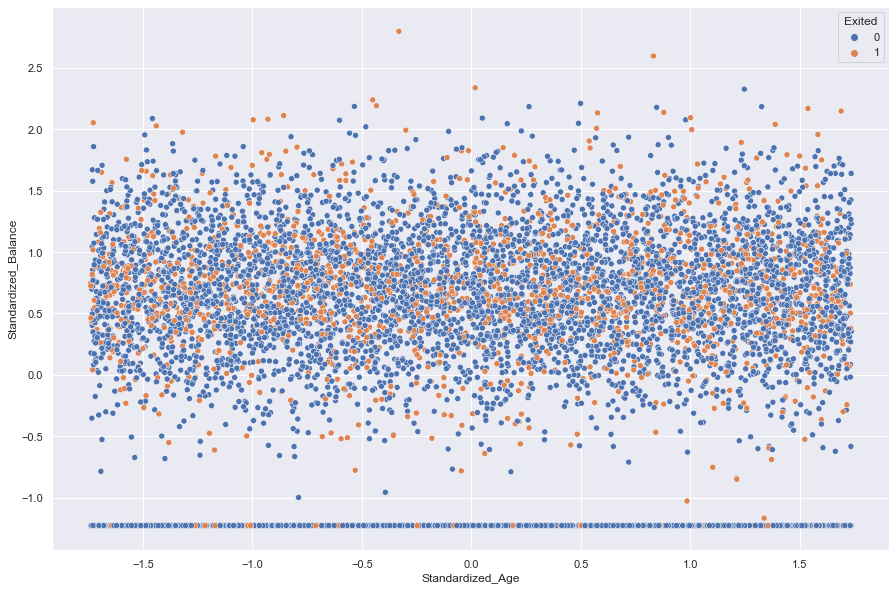 This only told us that as one ages, they earn more. 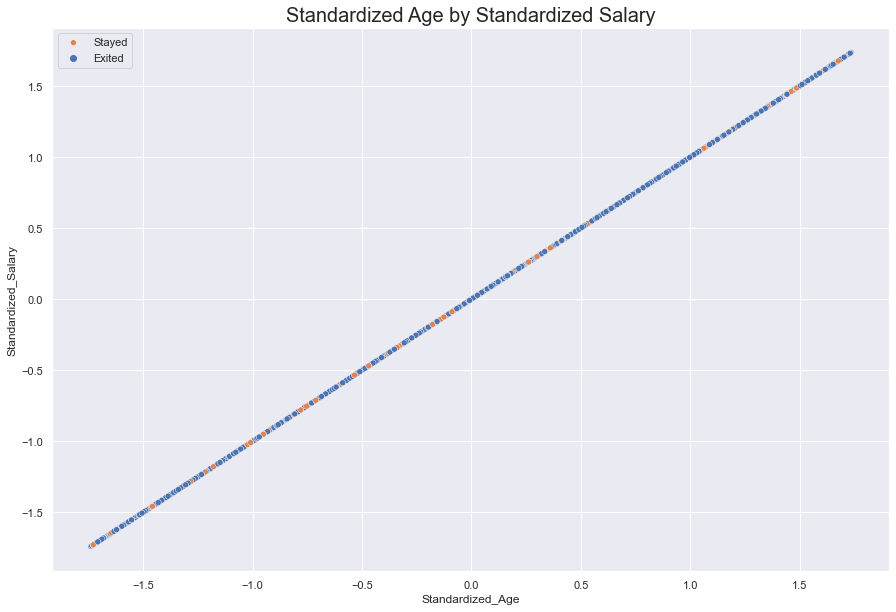 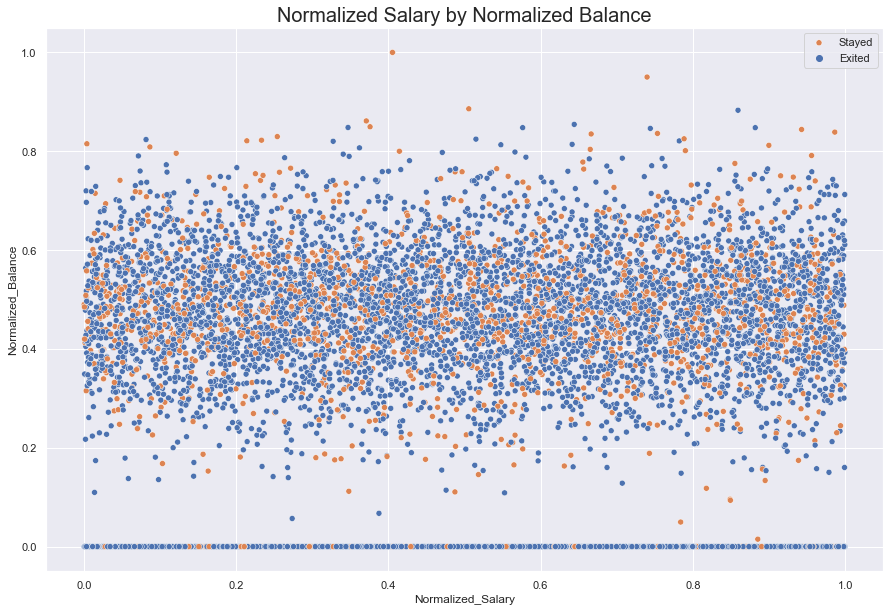 Unfortunately, our data transformation did not yield any additional insights that we had hoped for. We only produced more plots that are cluttered with noise. With the exception of normalized and standardized salary against age (as explained above), no plots revealed any relationships within the data. All the data remain non-linear. 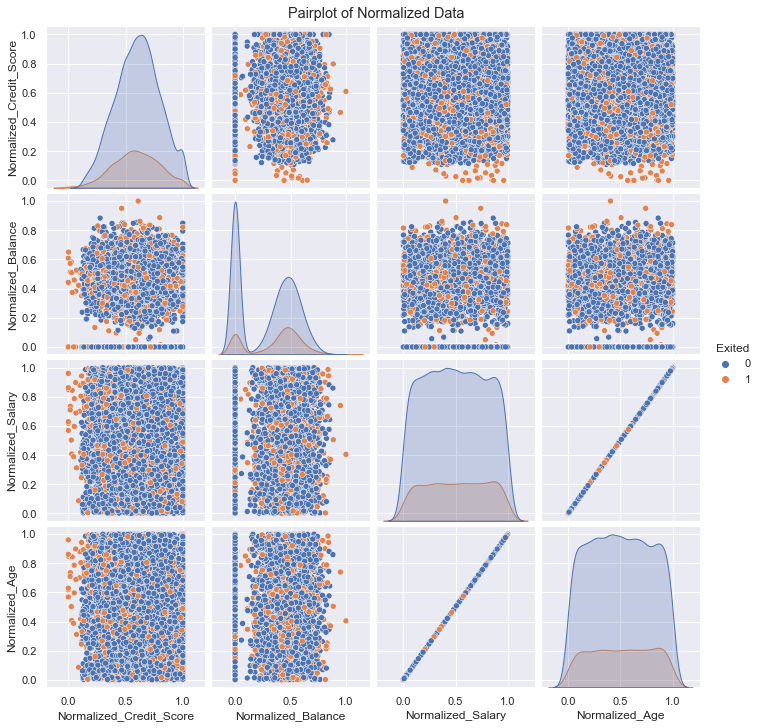 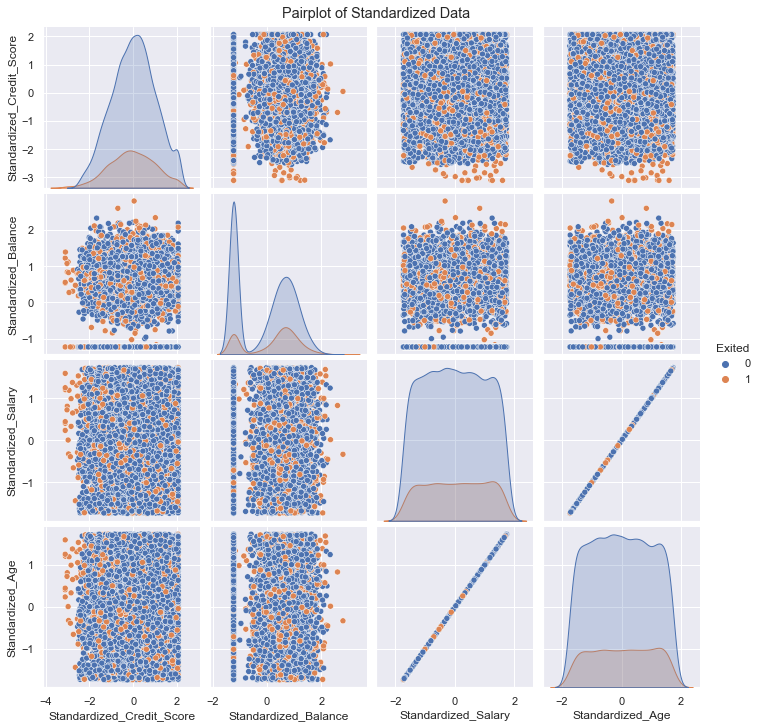 The EstimatedSalary and Age, as seen below, appears to have a non-linear relationship. This is because of the scale of the Estimated Salary is three orders of magnitude greater than that of age. So in this comparison the distribution of salary dominates and the linear relationship is not immediately obvious to the observer.

While the scatter plot below seems to suggest that Exiters dominate ages 50-60 , another graph can show us that this is more than likely an illusion. From the histogram below, we can see that in the age range 50-60, neither Exiters nor non-Exiters truly domiante one another. They appear to be evenly split except for a few instances where Exiters pull ahead. 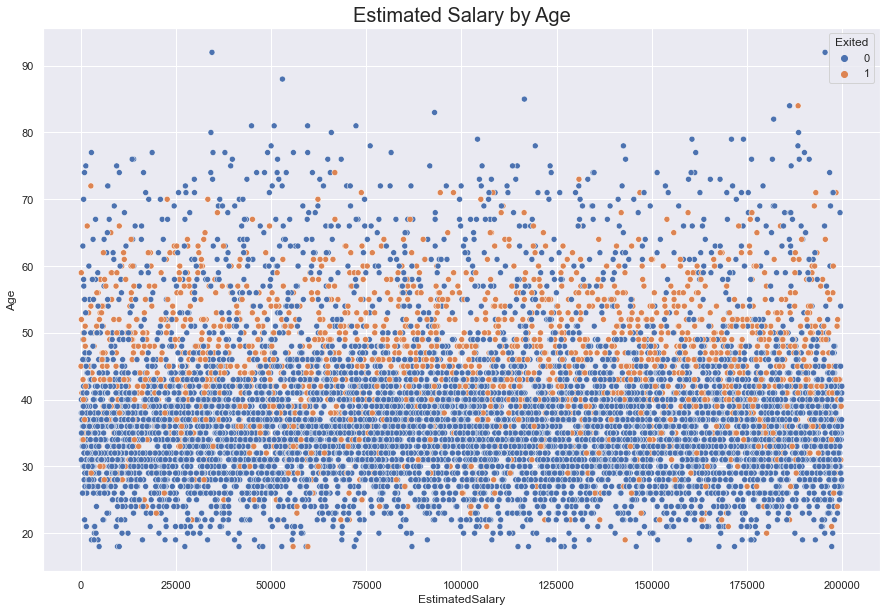 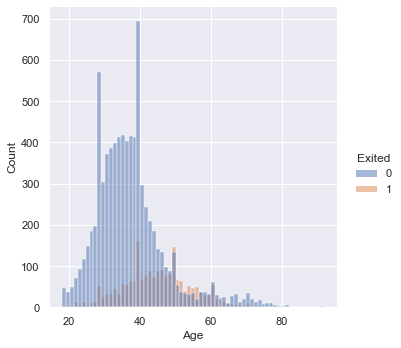 Given that this is an international bank (within the confines of Europe) it’s worth looking at if the bank is losing customers to native competition.

The French made up roughly fifty percent of the company’s customer base. Germnay and France were split evenly along twenty-five percent.

About 30% of German’s left the company, while roughly 17% of customers from France and Spain each left the company. In this case, Germans not only left at a greater percentage, but even in greater numbers. 878 Germans left while only 802 French left. Germans make up the strongest group that are leaving and perhaps present the strongest signal so far as to who our target customer is. 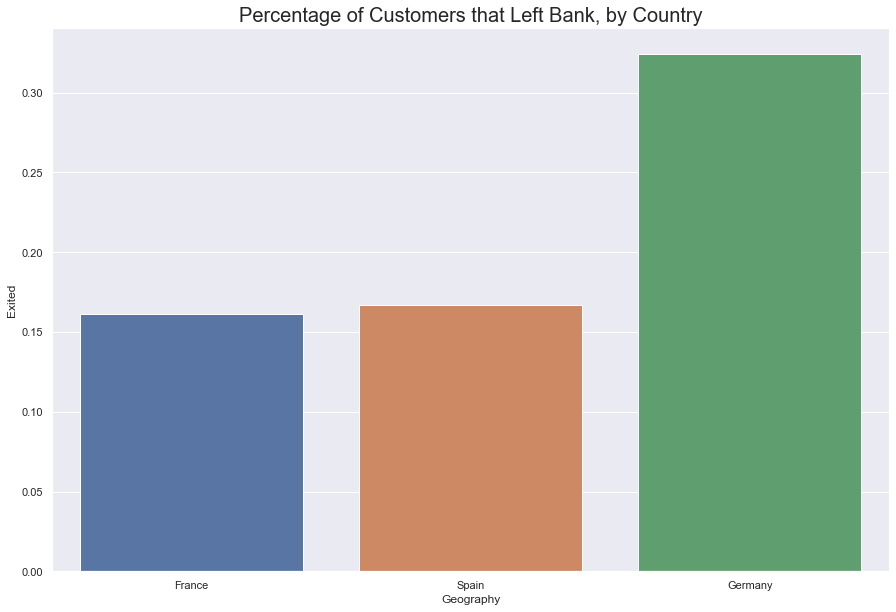 While it’s easy to theorize that the company should focus its efforts on retaining German Women, two simple associations is not enough to make this conclusion.

As was seen above, the financial relationships could not be easily investigated. Artificial Neural Networks can help pick through the non-linear data and provide more insight into who our disastified customers are. 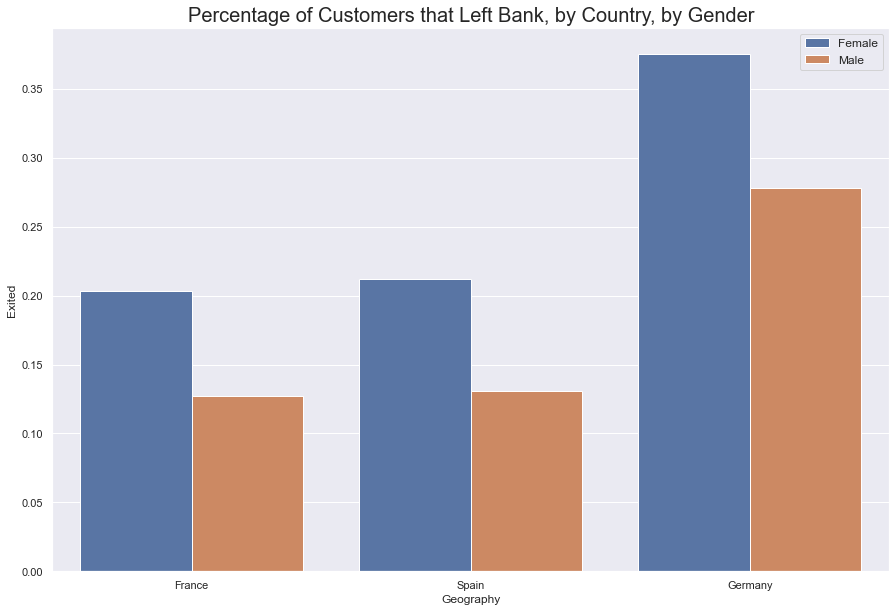 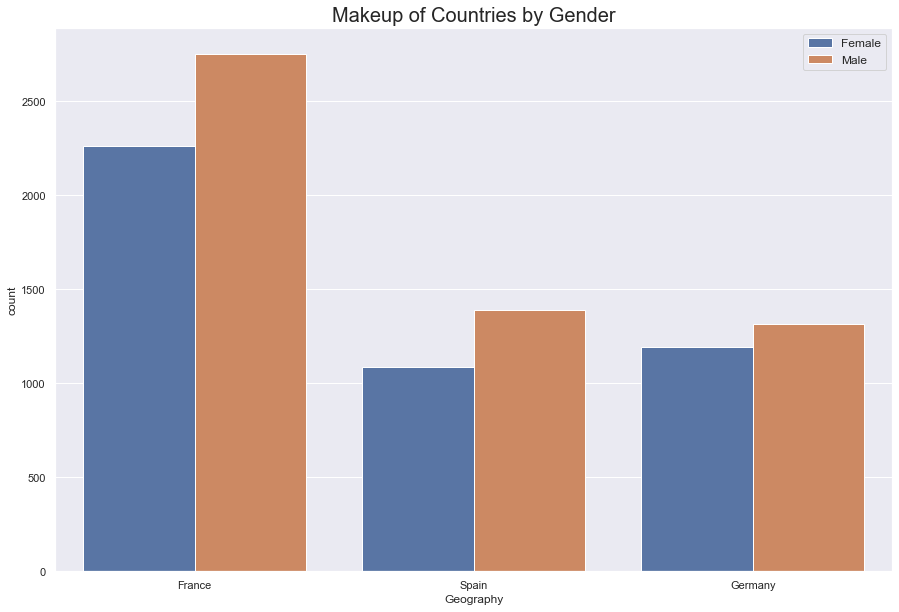 Lastly, we plotted a heatmap to find any correlations among the entire data set.

No strong correlations emerged in the data except for what was previously seen in the Normalized and Standardized Age against Salary. 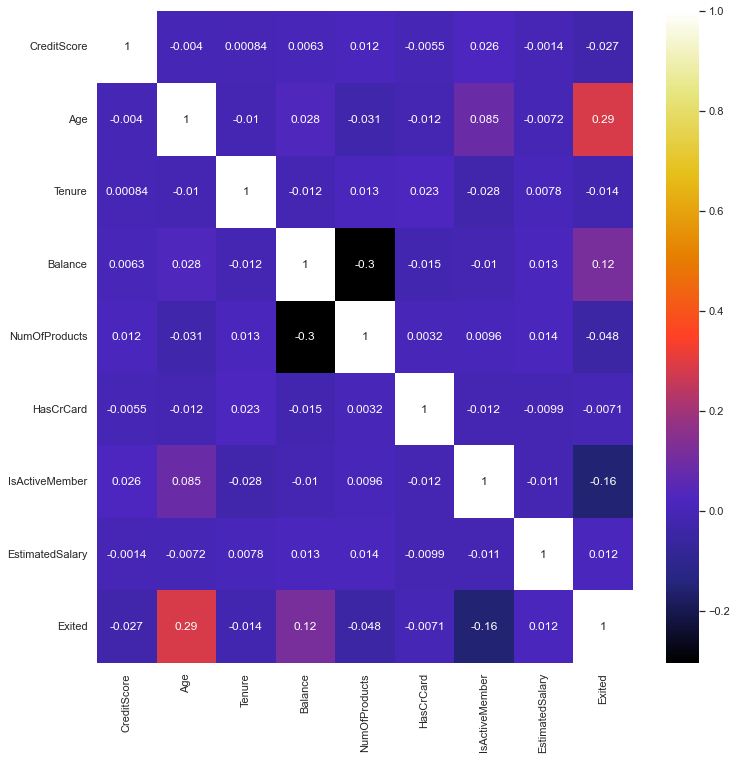 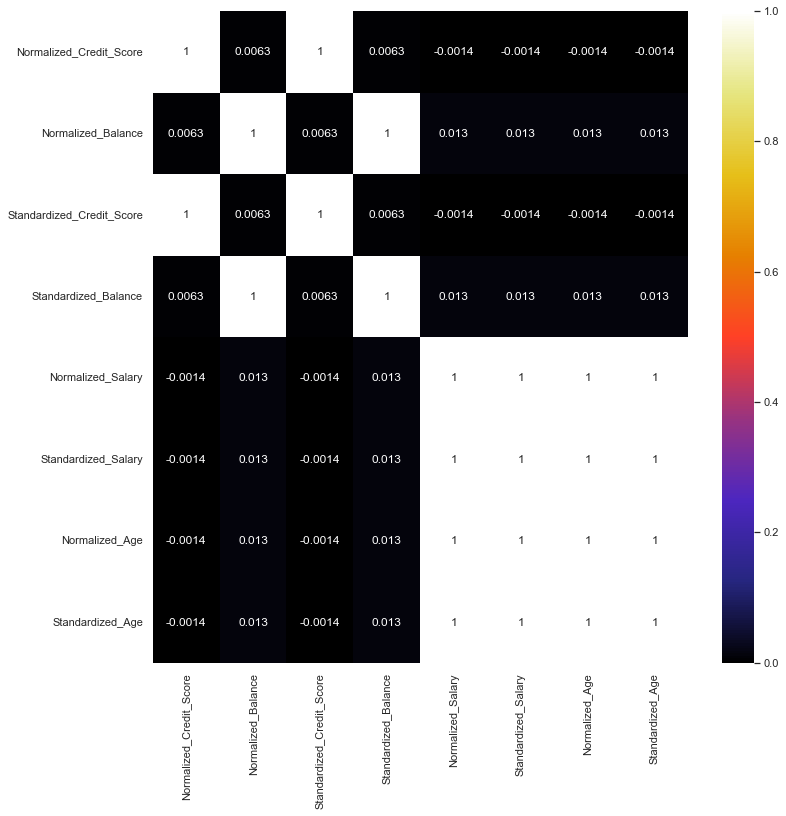 This dataset will contain one-hot encoded features from Geography and Sex. One-hot encoding is a binary representation of engineered features derived from categorical data. 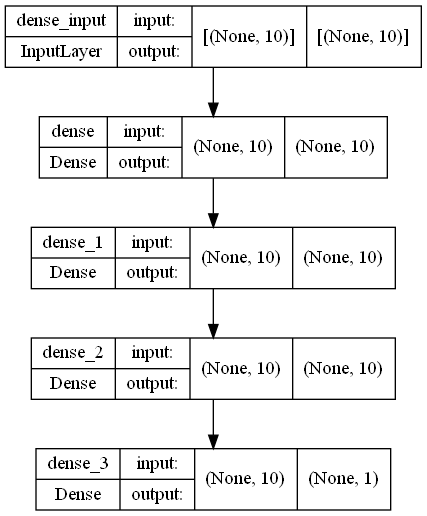 In the test set, the loss value decreased steadily over the epochs; however, validation loss flattened at around 100 epochs. The two error measures diverged, indicating overfitting.

For both sets, accuracy below 100 epochs and, despite constantly shifting, kept its momentum between .85 and .87 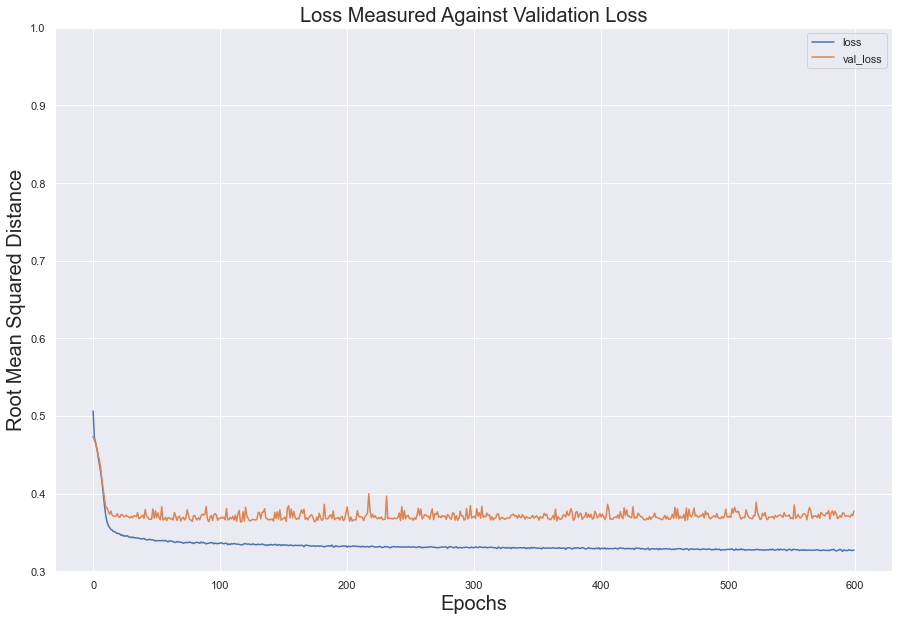 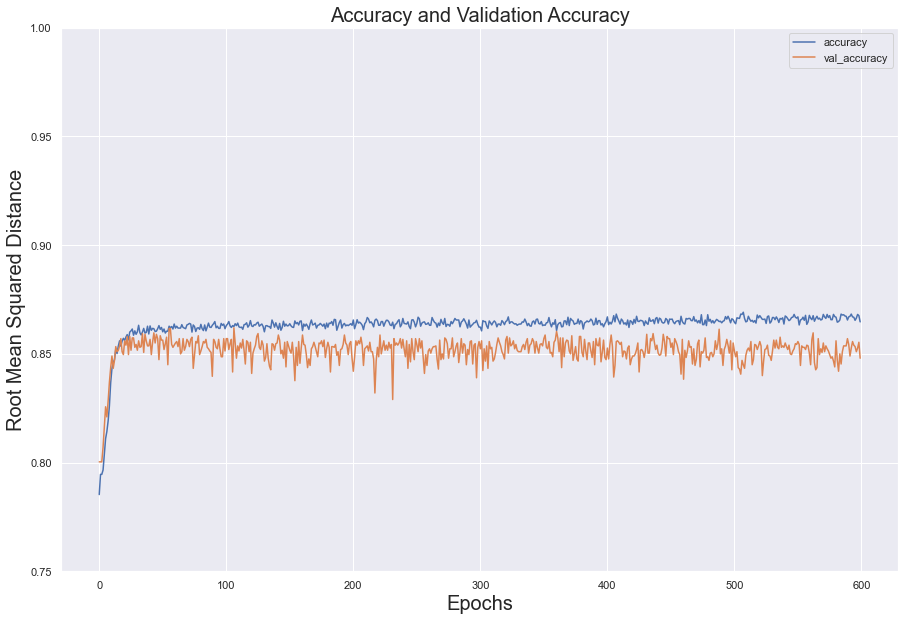 Utilizing Early Stopping, the error loss between the test set and validation set share a similar curve and slope; however, the two sets did diverge from another, suggesting over fitting. 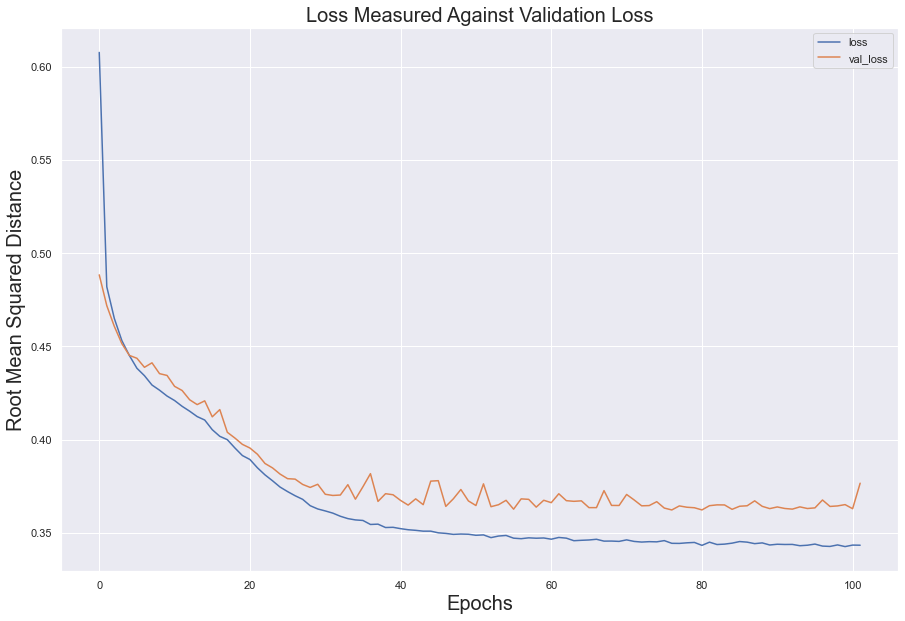 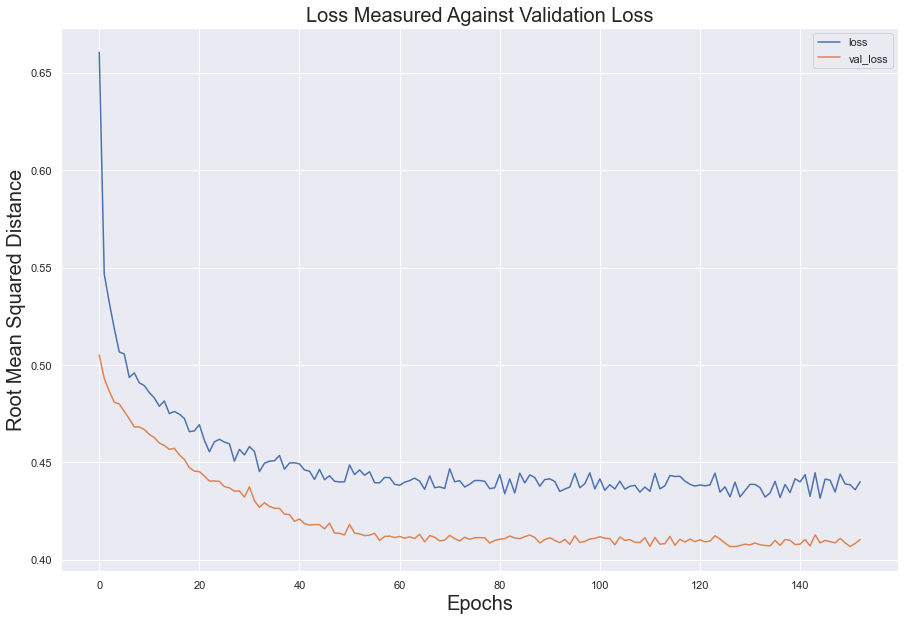 Per the classification report, our model learned to predict who is staying extremely well. However, the classification we cared the most about, who is leaving, earned an excellent precision score while having poor recall. This means that, out of all its attempts to identify our customer who was leaving, it misidentified them at a very low rate. However, per the recall score, it did poorly at identifying, among those who were leaving, those who were not leaving.

Because of the mixed results, we decided to test the predictive capabilities of our model.

This, unfortunately, did not turn out well. Given that roughly 20% of the customer base left the bank, it stands to reason that the labeling outcomes of our prediction should roughly reflect that.

Instead, after isolating the customer’s who stayed (that is to say, all the 0 labels), we found that our model only predicted that 17 customers stayed while the other 9,983 left. This is disastrous.

We believe our model did so poorly mainly because there was no strong signal within the data. That is to say, no clear relationship emerged in our exploratory data analysis to suggest who was leaving. Women did not leave in significantly larger numbers than men; tenure did not affect a customers decision to leave; all the financial data produced a lot of noise.

Because of these weak relationships, the algorithm could not learn to identify who was leaving. It was up in the air, so to speak.

We attempted to identify the class of customer that would leave the bank based on the data provided by the bank. We attempted to use Neural Network classification to find these relationships. While our data made strong suggestions that women, Germans, and people between ages 40-50 would be more likely to leave the bank, when the numbers were crunched, the signals proved weak.

We hoped that the Neural Network model would find relationships that our exploratory data analysis couldn’t pick up. While performed well, according to the classification report, the model failed to produce the appropriate ratio of stayed/exited as found in the dataset, which was 20%.

We concluded that this was more than likely due to the weak signal within the data set. That is to say, there just wasn’t a strong association among the different features with the Exited variable. We believe perhaps a deeper neural network could contribute to success in the future. It’s possible that more instances in the data (beyond the 10,000 that we had) could have amplified any existing signal to the point where it could have been useful. If additional features in the data set could be provided (more product information, policy information, changes in interest rate, etc.) this would provide more insight as to what could have compelled the customers to leave. But for right now, we’ve learned that data quality can determine how effective machine learning (neural networks) can be.